When I was between freshman and sophomore year in college, I took a summer job as a receptionist. It was an office of 30 or so people, most of them young executives with families starting their careers. I gravitated to a handsome, gregarious man who was my age and who welcomed my company. We both had wicked senses of humor, were fluent in sarcasm, loved to read and, found endless things to talk and laugh about.

Keith and I were inseparable and were often scolded for not being where we belonged or doing what we were paid for, instead standing in the office kitchen laughing and teasing each other. The confines of the work week quickly grew inconvenient and our shared time spilled into evenings and weekends. Our friendship blossomed and grew and had an undercurrent of romance, but it never went beyond an understanding that our love was deep, real and would remain platonic.

It was frustrating and seemingly without a plausible explanation, but Keith was the most significant person in my young life, and I was resolved to be patient. I returned to that office every college break and every summer as much for the tuition money as the ability to see Keith. When I was home, we were inseparable. When I was at school, we wrote letters and sent cards and spoke after 9pm when the phone rates went down. He made the five-hour drive to visit and met my friends, quickly becoming part of my college circle. Everyone adored Keith, me especially.

At some point, Keith started to withdraw and when we did speak he seemed distant. He was guarded with his words, slower to laugh and always at appointments, the nature of which were vague. A trip to visit me at school was canceled and an offer to drive down to see him was politely declined. When I came home for break and saw him, I was startled. He’d lost weight and the sparkle in his bright blue eyes wasn’t there. His perfectly coiffed, blonde hair of which he was so proud wasn’t styled and his skin was a color that signified illness. 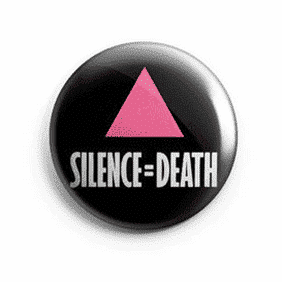 The year was 1988 and Keith was diagnosed with AIDS. It was a death sentence. People shunned him because he was sick, presumptively gay and perhaps contagious. So little was known about possible contamination that extreme avoidance was the prevention of choice. When I returned to work, I found out he no longer ate lunch at a table with a large group; he sat alone. From the day I got back, I sat proudly beside him.  I vividly recall the day I drank from his soda can and the entire room fell silent. I admit my stubbornness and blind allegiance to him could have proven fatal, but it didn’t matter. I was in it with him for the rest of his life, however tragically short it would be.

We donned “Silence=Death” pins and learned all we could about this insidious disease. (To this day, that pin is on a bulletin board in my office.) Along the journey I was exposed to gay culture of which I was tremendously naive and admittedly frightened. Patient, loving, understanding people showed me that ignorance simply needs light shined on it to be eradicated and I quickly not only accepted but advocated for alternate lifestyles.

We were met with anger, fear, hostility, soul-crushing cruelty and surrounded by sickness, pain and death. There was an uprising, but I feared that just like Keith’s battle against AIDS, the battle for equal rights for gays was equally as futile. Fortunately, I was wrong about the battle for equality. Tragically, Keith passed long before any medical advancements were available or social gains were made.

When I see the Pride Rainbow flag I think about how much brighter and hopeful it is than the pins Keith and I, and thousands of others wore. The message then of “silence=death” was true whether that meant avoiding testing out of fear or not living an authentic life and dying inside because you were living a lie.

Today, my heart sings as we use the entire month of June for LGBTQ awareness in commemoration of the 1969 Stonewall riots. I see Pride Flags on corporate websites, trucks, Facebook pages, TV commercials and I am filled with joy. People are entitled to live a life free of prejudice and judgement, fear and ignorance. That the symbol of pride has morphed from a sharp, single colored triangle to a flag of diversity and colorful joy befits a group who are now starting to live openly, happily and freely, as they so richly deserve.

Keith isn’t physically here to see the amazing and warranted progress, but every time I see a rainbow, I know it’s his way of smiling and laughing with me. June 19, 2019, would have been Keith’s 51st birthday. I know that the strides we’ve made towards acceptance and equality are the greatest birthday gift of all.

I’ll keep fighting the fight for you, my friend.

Until we meet again. 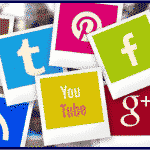 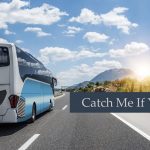 Bucket List Bus Ride – Catch Me If You CanBlog, Resources
We use cookies to ensure that we give you the best experience on our website.Accept