November is one of our absolute favorite months. In most areas of the country the temperatures have dipped down, nature is getting ready for a rest, and we are searching for warmth and comfort.  It’s once again time to gather recipes, while we create the To Do lists for the celebrations that will follow. Most of us have our go-to recipes that we make year after year because we know they are true crowd pleasers but, throughout the year, if you are like us, our eyes are always open to finding new and original recipes we are dying to try in hopes that they will become this year’s hit!  In our search, we came across a recipe that puts a twist on using “in season” ingredients in an unusual way.  So why not put on your apron, fire up the stove, and give this recipe for Apple Cider Cream Pie a try!

In 2009, Allison Kave and her boyfriend, Jay Horton, were winners in Brooklyn, New York’s Pie Bake-Off with this clever pie. The challenge was to use a local ingredient, so they chose apple cider and developed this delicious combination of cream pie and apple pie. Winning the contest was the impetus for Kave to open First Prize Pies in Brooklyn.

In a food processor, combine the flour, cornstarch, sugar, and salt. Add the butter and pulse in 1-second bursts until the mixture resembles coarse meal. Combine the milk and vinegar and drizzle it on top. Pulse in 1-second bursts until the dough just comes together. Turn the dough out onto a work surface, gather up any crumbs and pat into a disk. Wrap in plastic and refrigerate until chilled, about 30 minutes.
On a floured work surface, roll out the dough to an 11-inch round, a scant 1/4-inch-thick; ease it into a 9-inch glass or ceramic pie plate. Trim the overhanging dough to 1 inch and fold it under itself. Crimp decoratively and chill the crust until firm, about 15 minutes.
Preheat the oven to 425°. Line the crust with parchment paper and fill with pie weights or dried beans. Bake in the lower third of the oven for about 15 minutes, until the crust is barely set. Remove the parchment and pie weights. Cover the edge of the crust with strips of foil and bake for about 15 minutes longer, until the crust is just set but not browned. Press the bottom of the crust lightly to deflate if it has puffs; let cool. Lower the oven temperature to 350°.
In a medium saucepan, boil the cider until it’s reduced to 1/2 cup, about 10 minutes. Transfer to a bowl and let cool. Whisk in 3/4 cup of the sugar, the sour cream and salt, then whisk in the eggs.
Pour the custard into the pie shell without removing the foil strips. Bake the pie in the lower third of the oven for 35 to 40 minutes, until the custard is set around the edge, but the center is slightly jiggly. Let the pie cool completely.
In a medium bowl, using an electric mixer, beat the heavy cream with the remaining 1/4 cup of sugar and the cinnamon until firmly whipped. Mound the cream on the pie, cut into wedges and serve.
Serve with Baked apple slices.

Lekue Silicone Bagel MoldGadget of The Month, TasteBuzz A New Adventure in Every Bite, What's Buzzing 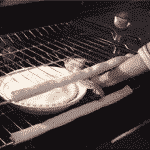 The Oven Rack GuardGadget of The Month, TasteBuzz A New Adventure in Every Bite, What's Buzzing
We use cookies to ensure that we give you the best experience on our website.Accept